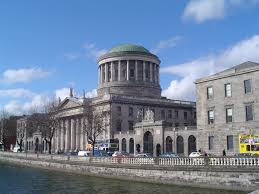 As I noted last week, an opinion by  Advocate General Trstenjak on the rights of asylum seekers under the EU Charter of Fundamental Rights (EUCFR) and EU asylum directives, held that asylum seekers should not be returned from other EU member states to Greece if the fundamental rights of asylum seekers are not upheld. In Ireland, all transfers of asylum seekers to Greece have been suspended since Clarke J. granted leave to appeal her decision in Mirza v Refugee Applications Commissioner to the Supreme Court in 2010. When Clarke J. referred questions in the case of M.E. and others v Refugee Applications Commissioner to the Court of Justice of the European Union (CJEU),  there were 32 similar applications yet to come before the High Court in October 2010.

In M.E. and others v Refugee Applications Commissioner, the five applicants had entered Greece, were requested to leave the country due to illegal entry and made their way to Ireland to claim asylum. The Refugee Applications Commissioner, exercising his powersunder the Dublin II Regulation, wanted to return the applicants to Greece so that their asylum claim could be determined there. M.E and the others argued that the procedures for determining asylum claims and reception conditions in Greece were so inadequate that Ireland was obliged to exercise its discretion under Article 3 (2) of the Dublin II Regulation to accept responsibility for examining these asylum claims. Clarke J. in the High Court made a preliminary reference to the the Court of Justice of the European Union asking whether Ireland, as the transferring state, is obliged to assess the compliance of receiving member states with Article 18 EUCFR (right to asylum) and the EU asylum directives. If so, and the receiving member state does not comply with EU asylum law, must the transferring member state accept responsibility to decide the asylum claim?

In oral arguments before the CJEU, Ireland (and others) argued that the EUCFR did not effect EU asylum law, and there was no obligation on one member state to enquire as to the procedural or reception rights of asylum seekers in another member state.

Advocate General Trstenjak re-emphasised the core points she made in her opinion in N.S (see my summary of this decision here and analysis of both decisions by Steve Peershere.) If a member state is unable to protect the minimum reception or procedural rights of asylum seekers under EU law and where this also breaches  fundamental rights protections, a state cannot transfer an asylum seeker back to the first EU country that she entered. As Peers has noted, the AG’s opinions in N.S and M.E. (if followed by the CJEU) mean that  national courts will have to consider the extent to which other member states protect the fundamental rights of asylum seekers. Peers questions whether these decisions spark the ‘death’ of mutual trust that was inherent in the Dublin II Regulation.

Both the N.S. and M.E opinions ensure consistency between EU law and the decision of the European Court of Human Rights (ECtHR) in M.S.S. v Belgium and Greece. For now, given the very serious issues with the asylum system in Greece (and the fact that the country is in danger of defaulting on its debts), it is likely that Irish transfers to Greece will be suspended for a lengthy period of time.