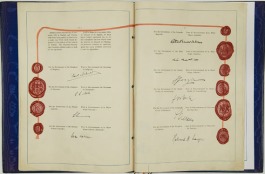 Today marks the 60th anniversary of the European Convention on Human Rights (ECHR) coming into force. Ireland was one of the original signatories of the ECHR in 1950, and one of the first states parties to recognise the jurisdiction of the (now overburdened) European Court of Human Rights (ECtHR). The history of the Convention, the Court and the cases and principles of law that have been developed and decided upon  have been well covered in a number of significant texts (see here, here, here, hereand here).

In June 2013, UCD Human Rights Network hosted a conference, organised by Suzanne Egan, Judy Walsh and I, on The ECHR and Ireland: 60 Years and Beyond. My paper ” Seasca Bhlian Faoi Bláth (60 Years A-Growing): Socio-Economic Rights and the European Convention on Human Rights” examined the emergence and development of the ECHR as a protector  of social and economic rights. While the ECHR is generally seen as protecting civil and political rights, with the exception of property rights, in the last number of decades a soft consensus is emerging from the ECtHR that such a distinction between both sets of rights is not warranted. The first significant suggestion that the Convention may be able to protect, to some degree, socio-economic rights, was made by the ECtHR in Airey v Ireland (for a background to this case, see here). Ireland stated that Airey was seeking to enforce a socio-economic right to legal aid and the ECHR should not be interpreted

The Court found that in some, but not all, cases, Article 6(1) ECHR obliges a State to provide for the assistance of a lawyer

…when such assistance proves indispensable for an effective access to the Court.

The ECtHR stated that

while the realisation of social and economic rights is largely dependent on the situation-notably financial-reigning in the State …the Convention must be interpreted in light of present day conditions.

There remains a general reluctance by the Court to enter into a substantive discourse on the ability of the Convention to protect socio-economic rights. This is mainly due to concerns regarding usurpation of the inherent powers which Government have in the field of social law and policy. The Court is aware that the Convention was drafted with the specific exclusion of socio-economic rights and the Convention was but the first step to wider human rights protections. Issues surrounding the socio-economic impact of Article 2 (right to life) have yet to be developed fully, although the recent Nenchevadecision certainly suggests that the right to life may impose on a State certain duties of a socio-economic nature. As regards Article 3 there is some willingness to find a violation of where material conditions of life are so poor that they reach a certain threshold of severity as seen in M.S.S. Through the creation of then doctrine of positive obligations, the Court has to some extent taken a more proactive approach in discovering the latent socio-economic nature of some of the Convention rights. Nevertheless, it is important to note that in both Nencheva and M.S.S. the ECtHR anchored there decisions in the failure of States to abide by their domestic legal obligations. The ECtHR has stated that Article 8 protections for family and private life cannot be indeterminate and broad. The Court has rejected all attempts to utilise Article 8 to protect socio-economic rights. Indeed, while suggestions were made in past case law about the Court reserving to see whether conditions of life and accommodation provided for vulnerable individuals were adequate,more recent case law has failed to restate this general principle. Overall, the Court is at pains to emphasise that there is no right to receive any type of socio-economic benefit due to a person’s lack of means. However, has stated that where welfare rights are granted under law, regardless of their status as contributory or non-contributory payments, they can be regarded as property rights. Nevertheless, any significant reduction of a social welfare payment, or total withdrawal of such a payment, must be assessed as regards the proportionality of the measures to the aim which is hoped to be achieved.

60 years ago the ECHR was viewed as a document that solely protected civil and political rights. The ability of the Convention to protect socio-economic rights remains limited, however the impact of more recent judgments in the field of the right to life and inhuman and degrading treatment are significant. It remains to be seen if and how, the ECtHR will expand upon its current socio-economic rights jurisprudence.

You can access my full paper on socio-economic rights and the ECHR here.