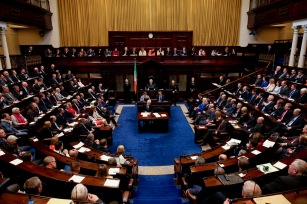 The rights of asylum seekers in Ireland are not fully legislated for. In places, laws of general application apply, such as the right to education for all children in the State, apply. Mainly however, the rights of asylum seekers are granted by the exercise of administrative discretion or on an ad-hoc basis by various Government departments. No-where in law will you find the system of direct provision for asylum seekers formally established. This will have to change in order for the European Commission to accept Ireland’s opt-in.

Is the fact that the direct provision system, and other supports provided to asylum seekers, such as medical cards, to be placed on a legislative footing a good thing? Some may argue that it this is merely legal fetishism, the rights for asylum seekers will stay the same, but now will simply be rubber-stamped by the Oireachtas. Overall, I do think it is important that the rights of asylum seekers be placed on a legislative footing. In 2013, a challenge to the failure of the Government to place the system of direct provision on a legislative footing failed. With respect, I believe the judge was incorrect in his assessment that the Government were free to expend public monies on a system that had no legislative basis. The direct provision allowance payments are paid as a regular supplementary welfare allowance payment, which is expressly prohibited by the Oireachtas, as those who benefit from direct provision allowance payments are expressly prohibited from receiving supplementary welfare allowance (exceptions do remain as regards exceptional and urgent needs payments). The State’s international agreements/obligations to protect those seeking asylum, which the judge relied upon, simply cannot displace (the lack of) national law. However, this issue will probably be moot in the coming weeks.

The process that is now in train for Ireland to opt-in to the EU’s Reception Directive is outlined by the Constitution. Article 29..4. 7° provides (in its relevant part):

The State may exercise the options or discretions—

iii under Protocol No. 21 on the position of the United Kingdom and Ireland in respect of the area of freedom, security and justice, so annexed, including the option that the said Protocol No. 21 shall, in whole or in part, cease to apply to the State,

but any such exercise shall be subject to the prior approval of both Houses of the Oireachtas.

Opting-in to the Reception Conditions Directive would have the greatest implications for the State as the State’s arrangements for the reception of protection applicants, namely Direct Provision, are not currently on a legislative footing.

However, I think it is unlikely that the Oireachtas will actually pass an Act of the Oireachtas, and more likely than not the EU Reception Directive will become part of Irish law by means of a statutory instrument. The Irish Constitution & European Communities Act 1972, as recognised by the Irish courts (see here), permits a Government Minister to adopt secondary legislation in order to give effect to European Union law. So, it may simply be an agreement from the Oireachtas for the Government to “opt-in” to the Reception Directive.

Given the confidence and supply agreement currently operating in the Dáil, there may be a (slim) chance that the Oireachtas consents to Ireland’s opt-in to the Reception Directive, but does so on a political understanding that legislation will be drafted to place the rights of asylum seekers on a legislative footing (this is probably very wishful thinking on my part).