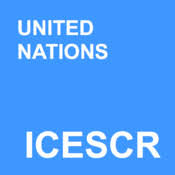 What are economic, social and cultural rights?

The right to work, just conditions of employment, the right to social security and social assistance, the right to health, housing, food and water, encompass core aspects of socio-economic rights. Cultural rights include the right to participate in the culture of one’s communities and to enjoy the benefits of scientific and technological endeavour. These rights (and others) are protected in ICESCR.

Ireland before the UN Committee on Economic, Social and Cultural Rights

To date, Ireland has had two periodic reports (1999 and 2002) considered by the UN Committee. On both occasions, the Committee have expressed concern that Ireland has not incorporated ICESCR into domestic law, and the lack of reference and utilisation of ICESCR by the superior courts. Ireland has failed to adopt rights based frameworks in areas of anti-poverty, disability provision of health-care, rights of members of the Traveller community, housing and the low rate of social assistance payments. CESCR identified some core issues with Ireland’s compliance with its obligations under ICESCR in December 2014, and the list of issues to be discussed bear striking similarities to concerns previously expressed by CESCR in their 1999 and 2002 Concluding Observations. (See, Ireland’s response to these issues here).

Some Issues of Concern

A striking feature of political and policy debates in Ireland on the protection of socio-economic rights, is the failure to define income maintenance through the social welfare and taxation systems, health care provision, access and provision of housing , the right to education and employment rights (to identify but a few areas), as “socio-economic rights”. Instead, various actions plans and governmental policy objectives, seek to identify these issues as ones of living within an “inclusive society”, or seeing the realisation of such rights as within an the political sphere (see, here, here and here). In 2015, the Central Statistics Office (CSO), found that 8.2% of the population were consistent poverty, 30.5% of the population suffered from forms of enforced deprivation, while 15.2% of the population were “at risk” of poverty. Those with disabilities, are 2.5 times less likely to be in employment that those without a disability. The economic recession impacted more significantly on the under-25s, the unemployed, person with disabilities, Travellers and lone parents, than other societal groups. The issue of access to affordable housing and homelessness has been a recent topical socio-economic rights issue. Asylum seekers continue to live in inadequate and poor communal accommodation, prevented from seeking work, and required to live on €19.10 per week per adult, and €9.60 per week, per child. Generally, there is no other entitlement to any other form of social welfare/social assistance benefits or payments (see here).

As well as the Irish Human Rights and Equality Commission’s (IHREC) shadow report, the core civil society report, from the Free Legal Advice Centres (FLAC), Our Voices, Our Rights, provides CESCR with key information on Ireland’s failure to fully protect socio-economic rights in a number of areas. Core themes that have emerged from IHREC’s national human rights institution report and FLAC’s civil society report include:

Proceedings Before the UN Committee on Economic, Social and Cultural Rights

A delegation from Irish civil society will be in Geneva on June 8th and 9th, presenting before the UN Committee and highlighting failures in Ireland’s duties to respect, protect and fulfil economic, social and cultural rights. Unfortunately, Committee hearings will not be webcast. You can keep up with developments in real time, through Twitter, utilising the hashtag #UNIRL. I will endeavour to provide regular updates on this blog from Geneva (wifi dependent!), throughout the examination of Ireland’s compliance with the UN Covenant on Economic, Social and Cultural Rights.